Wild Game by Adrienne Brodeur. LOVED it. One of my favourite type of book is a true story about rich people who do things that seem crazy to middle-class me. This book is so that. And it's also about breaking the cycle in parenting and not doing things that your abusive/alcoholic parents did to you. So good.
A Man called Ove by Fredrik Backman. Meh. I read Beartown, and wasn't super into it, but this is the book that gets more attention, so I wanted to try it. I found the writing really repetitive and slow. The story is good, just really slow.
Dear Girls by Ali Wong. I loved her Netflix specials like everyone else. And I loved this book. I was definitely not laughing out loud with this book (like with Tina Fey's Bossypants). The book is for sure more of a love letter to her husband, and I really liked learning about how they met. This was a cute and quick little memoir.
Trick Mirror by Jia Tolentino. This book is a lot. It's the kind of book that takes a lot of energy to read because it is so dense and feels so well-researched. I found myself copying sentences out of it into my little journal because they were so true. I liked it, but was always reading it with something easier to read at the same time.
Three Women by Lisa Taddeo. Oh wow, this book. It is the true story of three women and their sex lives. This is the main thing I learned/remembered from my own life while reading this book: Women always blame women for the bad behavior of men. Women blame themselves and they blame victims. Also, women deep deep down don't really like seeing other women happy and successful and sexually satisfied. I think this is changing right now with #metoo and #imwithher. In my own life, a man behaved badly and absolutely nothing bad happened to him. And a whole bunch of female relationships were destroyed by what the man did. I could talk about this forever. It is what keeps me up in the middle of the night. This book is such necessary reading for women alive in this time in the world.
0 comments

An overnight in Fredericton

Like everyone, we are trying to stay closer to home, especially with school being on the go and so much talk of a second wave. So we decided to do an overnight in downtown Fredericton, which is about 15 minutes from our house. We opted to bike there, which is about 21 KM on a trail that used to be the train tracks. We planned for about three hours for the bike ride, with lots of stops for snacks. And there is a gas station about halfway, and we had promised 7-year-old Cohen that he could get a Powerade there (highlight of the trip for him). The bike ride was super easy and flat. I was surprised by how good it went! We brought everything we needed (clothes, bathing suits, toothbrushes, water, snacks) on our bikes in dry bags.

We had the best time. Weirdly (or not weirdly I guess), the hotel was super empty. This feels like a pretty good time to do some staycations right in our town. And it's nice to know we are contributing to keeping a local business supported. Also, where we live there are super good deals for locals to stay in local hotels. So I feel like we got a steal of a deal. Such a great time with our little family. 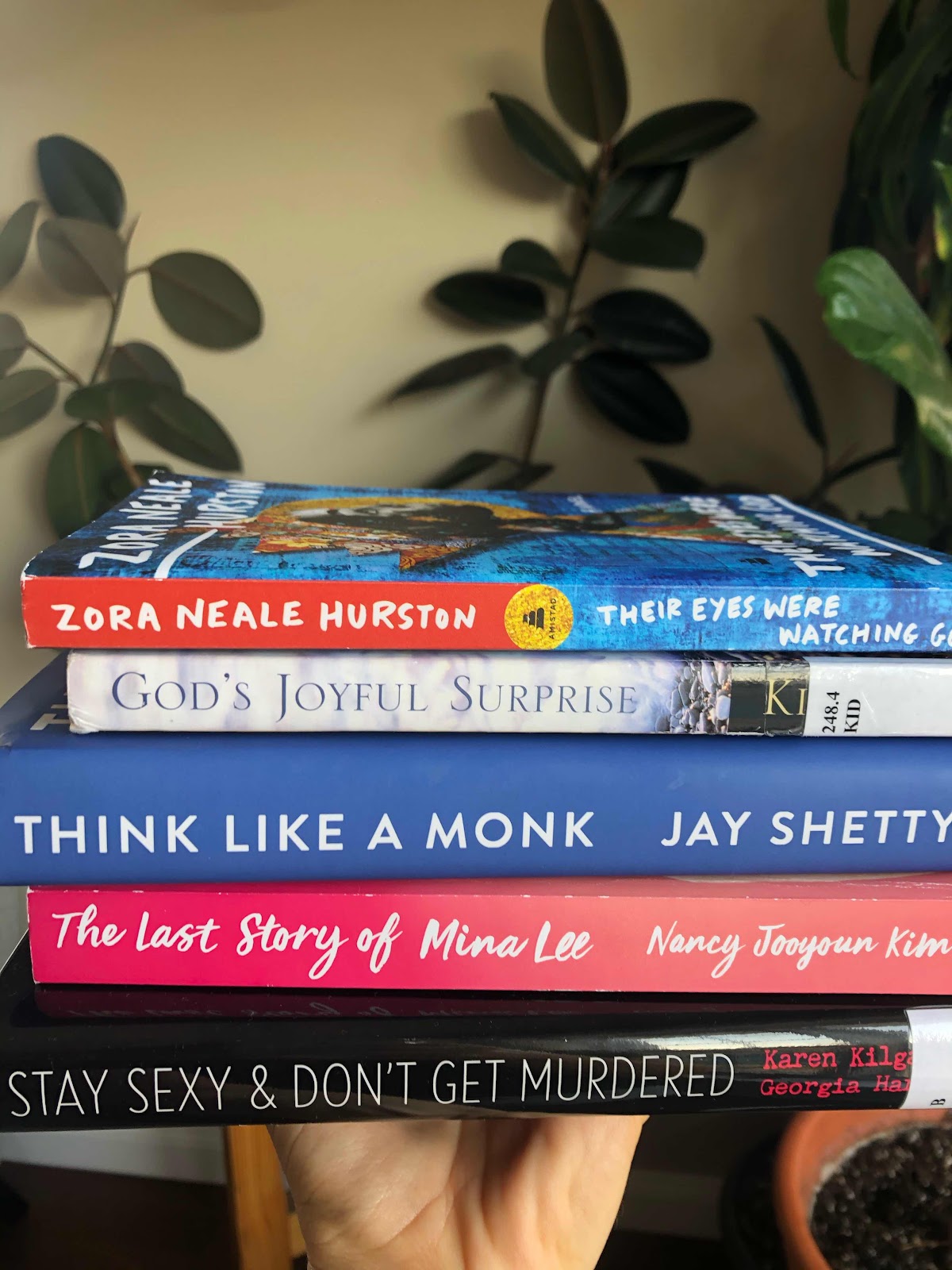 I read all these books in the last couple weeks and wasn't super into any of them. Let me explain:
Their eyes were watching god by Zora Neale Hurston. This was necessary reading for me. The main character's grandmother is the product of a rape by a slave owner. It's just really important for me to continue to read books by non-white people.
God's Joyful Surprise by Sue Monk Kidd. I have loved a few other books by this author, but this one was kinda meh for me. It is the story of how Sue goes from being totally busy with young kids and church duties to finding solitude and meditation. Basically, meditating is a good thing and we should all be doing it. Still so excited to read more of her books.
Think like a monk by Jay Shetty. This guy is a legit celebrity at this point. And he meditates for an hour a day! He was a full-time monk for three years before pursuing his current career. The idea here is that meditating is pretty much essential, and also we should all be living to help others. I am fully into that idea, but preferred this other book that he referenced a lot that I recently read.
The last story of Mina Lee by Nancy Jooyoun Kim. Something about this story felt rushed. The same imagery was used over and over, and the last half of the book felt like it dragged on a little. Still, I will pass it on to my mother and sister. It was decent for sure.
Stay sexy & don't get murdered by Karen Kilgariff and Georgia Hardstark. Pretty funny. I have actually only listened to a few of their podcasts, but in print they were super likeable and funny. It's always fun to learn about people going from struggling along to having success by doing the thing they love. Although for these two ladies, their idea of struggling was having their own cooking show and writing for a sitcom. Reading stuff like this makes me feel like LA is a whole other world.
Right now I am two pages in to this book, and I am OBSESSED. I will of course review soon.
0 comments

We had been wanting to renovate our master bathroom since we moved in four years ago. The main issue was the bathtub. It was one of those huge ones with the jets, and the jets didn't work when we did the house inspection. We had a plumber come in before we bought the house to see how much it would cost to fix the jets. The plumber couldn't find the box that controls the jets, so he figured it was behind drywall. He said it would cost LOTS to fix it. But we wanted the house, so we had the seller knock $1000 off the price and figured we would deal with it later.
The first quote we got was $50K, which is insane. Our house is small. This bathroom is small. Our home is a rowhouse, so the likelihood of getting back that kind of an investment when selling was not going to happen. Looking back, I blame myself for that insane quote. The designer who we had come in and look had made a bunch of suggestions, and I had said yes to everything. Jon and I just didn't really care or have major visions for this bathroom. So the designer had included things like all marble floors, a marble walk in shower with fancy glass inclosure, and a custom marble counter. Marble, marble, marble. I was so disgusted with that quote, that we put the master bathroom on the backburner for another year or two.
The second quote we got was way more reasonable at $14K. This was from the local hardware store that also does full installs of bathrooms and kitchens. We were really excited to work with them. The catch: they weren't able to order any double sink vanity except the exact one we already had. The one we had was totally fine, but I was hoping for something with legs or floating. I couldn't wrap my head around getting thing big renovation but still being stuck with the same vanity.
So we went with the third option, which was a contractor who had done a lot of work for a friend of ours. He told me what to order, and then he came in and installed. So I ordered the vanity from wayfair, the tub from the local hardware store, the faucets from ikea. What I liked about doing it this way was that I bought things little by little, and the contractor/handman gave me a bill for the hours he worked each week. So financially, it felt way more do-able compared to having to write one huge cheque at the beginning.

Jon and I just don't care that much about the details. Like, the contractor wanted us to go to the tile store to choose tile. We were like, please, just choose whatever you think. And really, we are so happy with the tile he chose. And then we had our painter come in and paint. He asked us what colour we wanted. We just didn't care. White, I guess? So he said he had a pewter colour he had just used on another home and it looked good. So we went with that. And I love it!


These pictures are obviously not styled, but they show the changes. We are really so happy with our new bathroom. What I love the most is that the ceiling of the tub area was raised a foot. It makes the tub feel so much more spacious. I also love the open shelves instead of the huge cabinet that was built into the wall.
0 comments 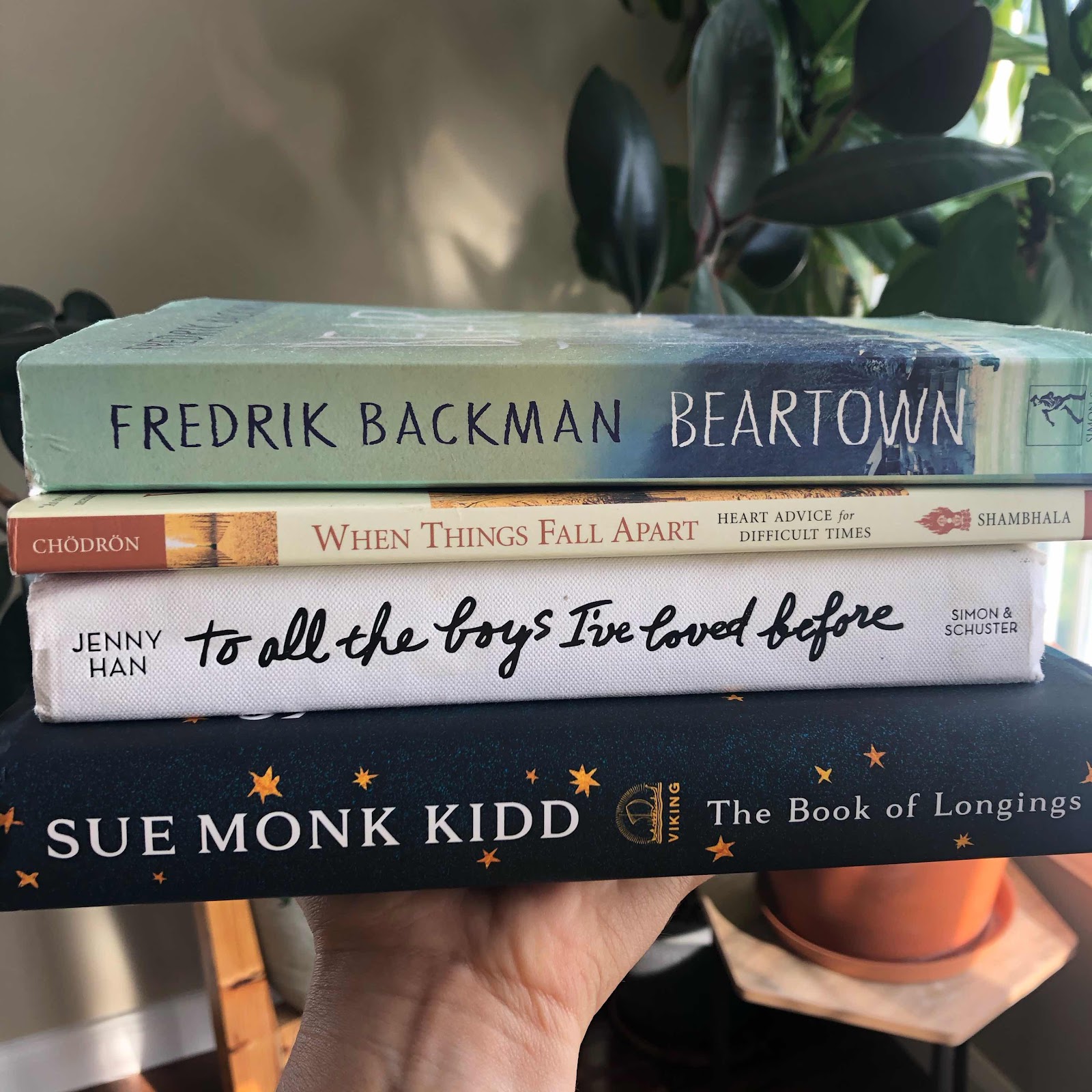 Beartown by Fredrick Backman: Jon read this one first, and liked it, and so I read it after him. I felt pretty reluctant to get into the style of writing. Lots of the sentences are super short. I found it hard to get used to. And then at the end everything gets wrapped up in a pretty bow, which is something I used to love when I was a teenaged reader, but now I'm not so into. This book dealt with a lot of stereotypes and also rape. In the end I really did enjoy it, and I really want to read his other bestseller, A man called ove.
When things fall apart by Pema Chodron. Oh my gosh. This one is amazing. I first heard about Pema on the Oprah podcast (my true fav). I can't gush enough about this book and this author. This book talks a lot about leaning into hard things. That just resonates so hard for me as someone who loves to avoid difficult decisions. I will probably read this book again in a few months. Also, we should all be meditating.
To all the boys I've loved before by Jenny Han. Now I need to check out the Netflix movie. This was a really light easy read, and I loved it. I have always wanted to write about teenaged love because it can feel so intense, and I feel like this author nailed it.
The book of longings by Sue Monk Kidd. So this book was pretty intense. It is the story of Jesus's wife if he had a wife. I had to keep looking stuff up to see what was fiction and what was true. I know VERY little about Jesus, so I feel like I learned a lot from reading this book and then looking up parts from the book. I loved talking to Jon, who went to Sunday school every week as a child, about this book. Now I wonder if Jesus actually did have a wife. I always love this author's writing, and this book was no different.
0 comments